Mark and Pat Terry share some recent reports from a Ukrainian believer with some encouraging answers to prayer. As we read these stories of survivors, we can't help but see God's miracles and angels at work: 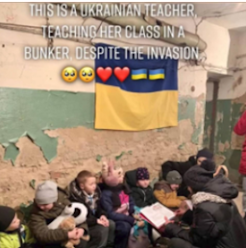 * Julia, a teacher from Konotop, shared that her      husband defended the city of Irpin with his friend Maxim. Maxim did not have a very strong relationship with God before. But in war, they prayed constantly and death with God did not cause alarm. Maxim asked God if he had to die, to make it a special death, that he could do something good. During heavy shelling, he took off his bulletproof vest and wrapped it around a child. Maxim died but the child survived. It is impossible to describe all the horrors of war, but we thank God for such people and their sacrifices.

* Three women left Bucha on foot to get to Irpin. They called it "the road of death" because many died on that road, so they were praying the whole time. When they got to a checkpoint, the soldiers asked where did the fourth one go because they saw a man leading their way.


* A lady was peacefully sleeping in her bed on the second floor of her house. She woke up because she heard a noise downstairs and decided to check on it. She didn't have the time to reach the first floor when her house was shelled – a rocket broke the roof and hit the bed she was sleeping on but did not explode. She wasn't even scratched. 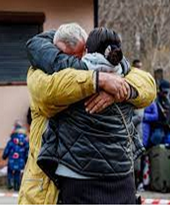 * A man in an occupied town left his bomb shelter to go across the street to get water. His wife heard gunshots, saw him fall to the ground and Russian soldiers pass him by. After the soldiers left, he got up unharmed. He explained that he didn't see them coming but he heard a voice say, "drop to the ground" and did it just in time to dodge the bullet. It saved his life.

* A family was sheltering in their garage basement in Mariupol for weeks. 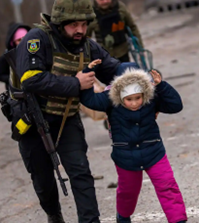 May these stories encourage us and help us pray with even more fervor. Please continue to pray for this "David and Goliath" battle to bring glory to God.

In His love,
Mark and Pat Terry 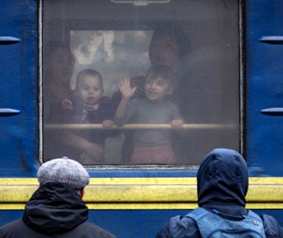 5/18 Alan & Lynée Ward
Wycliffe Bible Translators, USA
Hundreds of minority language groups around the world that need a Bible translation also need computer fonts with special letters. Alan works on a team that creates some of the needed fonts. Rejoice with them in the release of a new version of their Latin, Cyrillic, and Greek fonts, which are used around the world where Bible translators need European-style alphabets for minority languages.
5/19 Charlie & MaryBeth Berry
Cru (Unto), USA/Worldwide
Their ministry, Unto (Cru’s humanitarian ministry), needs more full-time staff members. Please pray God will provide for those positions. Praise God for the Middle East Vision Clinic trip, which the team of nine, including MaryBeth and son, Stephen, tested vision for 1,175 people living in a refugee community, and provided free glasses to most of them. Two other vision clinic teams also served nearly 1,200 people each, in Tanzania and El Salvador.
5/20 Beverly Minor
Central Missionary Clearinghouse, Austria
Pray for her church and its people, which has adopted a church in Ukraine, where a van loaded with food and relief supplies makes a weekly delivery to the church or just across the border. They also gifted this church with over 6000€ and donate food and relief supplies to other locations in Ukraine through GAIN (Global Aid Network), which is located in Hungary.
5/21 Dave & Mikkel Tegelaar
Cru/Athletes in Action, USA
Pray for their staff team as they teach through the book of Philippians at their 1TENN meetings on campus this semester.
5/22 Sergio & Linda Mijangos
Avant Ministries, Guatemala
Even while facing serious health issues themselves, Sergio and Linda continue serving on behalf of the seminary through the Internet. Linda is seeing some clients and teaching the Ladies’ Bible study with her neighbors through Zoom. Sergio has been teaching his class and handling other responsibilities from Houston. Please pray for Linda’s healing from cancer, and for Sergio’s high blood pressure to decrease.
5/23 Bill & Joy Boerop
World Thrust International, USA/Worldwide
Thank God for a collaborative agreement between Africa Christian Mission Institute (ACMI) and Lead City University in Nigeria. This opportunity provides a platform for one of the World Thrust Seminars, thereby allowing ACMI and World Thrust International to produce a greater number of graduates to move into world missions.
5/24 Tim & Kathy Cummins
Whirlwind Ministries, USA
Pray for the mission kids who will be graduating from fifth grade and going into middle school. Pray for the teams coming this summer; pray that easy lodging is found and that the communities are welcoming. Pray for our friends overseas. Pray for Ashley to have meaningful conversations with her patients.